NextWhat You Should Know About Social Recruiting
Chasing PassionEducation

Back in the day, showing your hands on skills in an open area was well enough to make every female (or male) within a 10-mile radius imagine a life with you. These days, having a good hands on skill may not make you the most attractive being, but it’ll make you look a bit more uhh… handy.

Fortunately, people are willing to part with some cash when they find out that you have the skills to answer their problems of soundproofing the toilet. So what should anyone with the skills for the job do? Put it to good use and earn something from it of course!

Here are a number of hands on skills that can help you earn some sweet, sweet moolah:

Building Your Own Guitar/Musical Instruments

Known as luthiers in the music world these passionate group of people who build string instruments which are usually made out of local wood. Imagine smelling mango wood on a guitar while ripping out a David Gilmour solo, but if you’re not a Floyd fan- you can always bring mangos to heaven with Knockin on Heavens Door.

On the case of other types of wooden instruments, there is also a good market here in Malaysia for people interested in hand built Cajon Drums. Like the one in the pic below.

Thankfully they didn’t make stairs out of that

While some of us secretly like role playing as an elite marine scattering LEGO’s when no one is at home and later getting shouted at with “Why don’t you get a job?!”. Somewhere out there a lawyer by the name of Nathan Sawaya threw his mid-six-figure salary to become the worst roommate ever. At the very least he pays rent on time.

Mr. Nathan pays his rent by being a LEGO certified professional (LCP). Which according to him, nets you more money than working as a corporate lawyer.

LCP’s are not LEGO employees, but they are officially recognised by the LEGO Group as trusted business partners. Being an LCP however, is no easy task, the mafia group LEGO is usually quite secretive with what they want in a candidate.

Seeing as how the world of LEGO is huge you can always opt for being a LEGO broker and sell some parts from LEGO sets, or buy LEGO sets for low and sell them for high (depends on what kind of investor you are).

Not all heroes wear capes

Now while you may be thinking that fixing your friends IKEA furniture and getting payment in the form of lunch is sustainable, that only applies if you can sleep on said furniture.

Now ever since the advent of IKEA, carpenters have been a bit of a niche these days. However, that doesn’t mean it pays peanuts. Walk into any other furniture shop and you’ll quickly know the reason why you’ve been going IKEA for furniture. A bowl of Maggi Goreng can barely fit on these tables, yet they cost like a Lamborghini plated in gold. Fortunately, some people prefer that their house doesn’t look like an art gallery from Stockholm, which means good money for the carpenters who sell their work.

If you have a knack of building furniture fom scratch or great at the process of restoration, you could charge good sums of money for that skill. Heck, you could even invest time and effort and sooner or later build a furniture line that people will wait in line for! 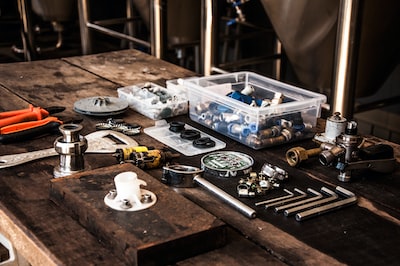 There sure aren’t many plumbers in the office.

So it’s past lunch hour and after having a healthy deep fried chicken, fries, and some soda, you decide to drop number 2. Turns out the rest of the office had similar healthy meals and now the toilet is clogged. Your boss now has to go, and you decide it’s the perfect time for an opportunity to gain some extra cash for being handy. An hours pay is now earned in 20 minutes followed by a promotion.

Soon you realise that you could fix not just your office’s plumbing woes but also extend your services to friends and family with a price more than a set lunch meal. Not much of a pipe dream making money through plumbing is it?

Walk around in KL and you’ll find all kinds of “creative” murals, mostly in the form of colourful words grouped together. There is quite a growing demand in Malaysia for murals to be done in private spaces/properties (i.e. cafes, restaurants, and etc.) thanks to the efforts of a Lithuanian artist, Ernest Zacharevic, for his outstanding work in Penang.

If you have the artistic flair and have the ability to stand around in the hot sun and paint in odd places, yes this is a great way to earn some street cred and sums of money.

Ever got a private interview with the discipline teacher by customising your school shoe with the “Metallica” logo because it was THAT good? Fortunately for you, the market is bigger outside of school grounds and it also pays better. If you’ve got a knack for customising those Nike’s, chances are people are willing to pay big bucks for it. In fact, some big time celebrities get their shoes customised.

This is the third time the microphone isn’t working. Where’s Daniel?

If you’ve got a knack dealing with electronics like sockets why not charge Henry for asking you to solder his headphones after the 5th time. If you have the skills to not electrocute yourself and successfully repair a number of electronics by soldering certain parts on the circuit board; or making connections and other forms of electronic work, then yes it is something most people aren’t willing to do (and will pay well for it) because they’re too scared to die young from electricity.

Now, where did I leave my canvas?

You look at yourself in the mirror drawing what seemed like a Picasso painting just on your face? Did you look good? Instagram and Facebook likes seem to say so.

Well fortunately for you if you’re good at making faces look great with the right tools, colours and powders; making some cash through it is perfectly possible (be ready for really angry customers if you screw up, though). There are many courses and workshops available in Malaysia for budding makeup artists, and who knows, it could launch you into a whole new career instead of just being a freelance job.

Hear it from Benita and her story of how she made this skill her own.

So that’s where I left my driver’s license.

If you’re one of those people that I would call when my car breaks down, chances are your automotive skills are pretty average. However, if anybody else calls you for help, you there have a skill worth paying for. Cars and bikes are everywhere and owned by everyone. All of which need some maintenance and loving care given to keep them running. If you can do more than just an oil change, don’t just ask for milk and cookies, ask for many, many moolah!

So there you have a few skills that you could capitalise on and make an investment in. There are many more skills you could monetise but if I were to continue this article will never end. Got the skills? Make money man!